Central Bhutan is an exciting destination for all visitors. It includes some of the most significant historical and religious sites in the country. The district of Trongsa has always been of great political importance to the leaders of Bhutan due to its commanding location in the center of the nation while Bumthang district has some of the most ancient and important temples and monasteries in Bhutan.

The Watchtower of Trongsa Museum: This ancient tower has been made into a museum dedicated to the Wangchuck dynasty and provides visitors with an unparalleled insight into Bhutan’s political history, Chendebji Chorten: An interesting and visually striking religious building with eyes painted towards the four cardinal directions. Legend states that it was constructed to subdue the remains of an evil spirit that manifested as a gigantic serpent.

In addition to the traditional annual religious festivals (Tsechus), there are also many newer festivals showcasing the rich traditions of the region like the annual Nomad’s Festival and the Matsutake Mushroom Festival in Ura, Bumthang, Royal Flower Exhibition, and Royal Highland Festival.

Central Bhutan is a region blessed with great natural beauty and there are miles of pristine alpine and sub-tropical broadleaved forests teeming with all manner of flora and fauna. The Thrumshingla National Park is located in this region and is famous for the many rare and endangered birds that inhabit it including the Rufous necked hornbill, Rufous-throated wren-babbler, Satyr Tragopan, Beautiful nuthatch, Ward’s trogon and Chestnut-breasted partridge. Visitors may even catch a glimpse of the exotic animals that live in the park such as the majestic Royal Bengal Tiger or the adorable Red Panda. 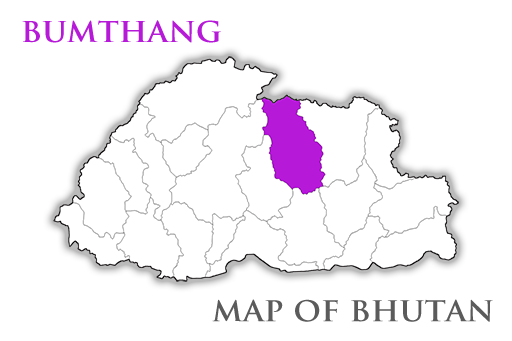 Hike up to Kuenzangdra Monastery

Tamshing Lhakhang (with special permit only)

Hikes can be arranged.

Bumthang-Kurjey Bumthang is the general name given to the complex of four valleys Chumey, Choekhor, Tang and Ura with altitudes varying from 2,600 m to 4,000 m.

Today, it is a district with its administrative headquarters at Jakar which is known for its honey production, cheese, apples and apricots. Its arable land and development projects have led to the improvement of the local economy in recent years.

The Dzong at Jakar and other holy shrines are major tourist attractions. Bumthang is also the traditional home to the greatest Buddhist teacher Pema Lingpa to whose descendants the present monarchy traces its ancestry. 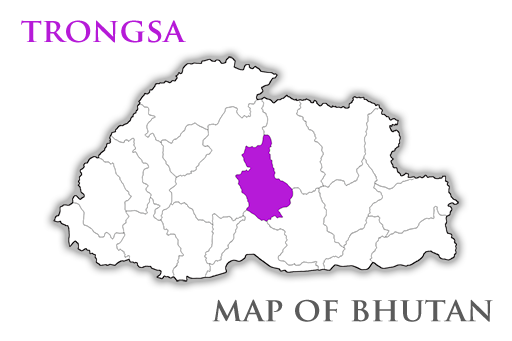 Trongsa is at the center of Bhutan and four hours by road from Wangduephodrang. The Trongsa Dzong is a labyrinth of temples, corridors, and office holding court. Perched on the rim of the valley it can be seen from every approach.

The Royal family has strong links with Trongsa. Both His Majesty the King Ugyen Wangchuck, the Penlop of Trongsa and his successor, King Jigme Wangchuck, ruled the country from Trongsa’s ancient Dzong.

The Crown Prince of Bhutan has always held the position of the Trongsa Penlop prior to ascending the throne. The present King continued this tradition as he was appointed Trongsa Penlop in 1972 shortly before he ascended the throne of Bhutan.

Our top Tours in Central Bhutan